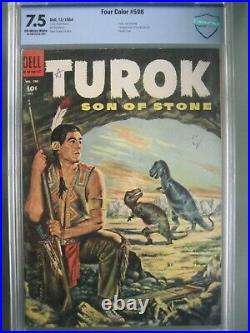 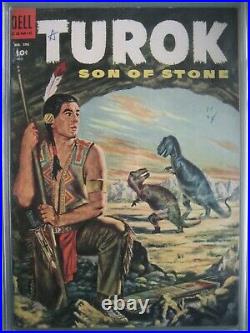 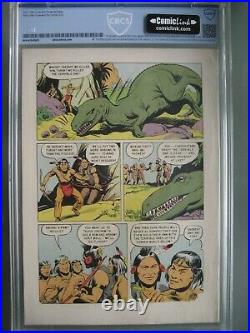 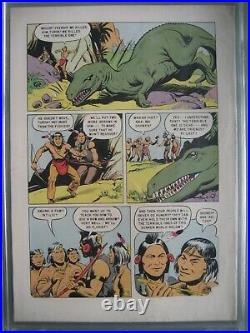 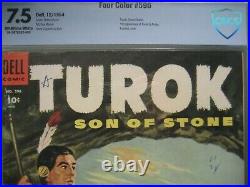 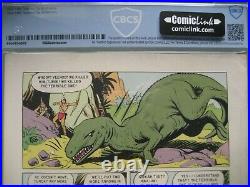 December 1954 Dell Publishing. 1st Turok & Andar. Turok, Son of Stone. Gaylord Du Bois (Story) Robert Susor (Cover) Rex Maxon (Art). This 1954 issue, commonly referred to as’Turok #1′, introduced an interesting blend of the Western motifs that were so popular in the 1950s and the’Lost World’ science fiction of a hidden prehistoric world. Turok’s own title ran for 130 issues and nearly 30 years, making it one of the publisher’s most successful original series. The dinosaur-battling Indian was later reintroduced by Valiant in the 1990s and that series went on to spawn a host of video games and other licensed material. The offered example has been graded at the CBCS 7.5 tier. It has also retained near newsstand-fresh Off-White to White Pages. At a point before the coming of the Europeans to North America, two Mandan warriors, Turok and Andar, hunt game north of the Rio Grande, near the Carlsbad Caverns in New Mexico. As they finish their meal, they spy hundreds of bats swarming out of a cave on the other side of a nearby slope. They decide to explore the cavern the following day in the hopes of finding much-needed water. Their travels into the cave take them into large caverns filled with enormous stalactites and stalagmites. They find water, but a nearby skeleton leads Turok to determine it to be poisonous. After more wandering, they stumble upon drinkable water inhabited by strange fish. Turok decides to follow the water downstream, hoping it will eventually lead to a way out of the caves. The river ends at a low-hanging tunnel, and Turok and Andar, smelling green things on the wind, decide to swim through it. The two warriors exit the water and walk towards the daylight shining in through the cave’s exit, but they are suddenly set upon by a large bear. Jumping back into the water, they inadvertently lead the bear into a swarm of carnivorous fish. Safe for the moment, Turok and Andar exit the cave and find themselves in a strange valley. They begin searching for food, and Turok manages to fire off an arrow at a small reptilian creature, but the creature is suddenly eaten by a Dimetrodon. The warriors decide to get to higher ground in order to see more of their surroundings, but the “hill” they try to climb turns out to be a Brontosaurus. Turok spies a rabbit and lances it with an arrow. They decide that the rabbit’s existence in the valley means that humans should also have no problem surviving there as well, at least until they can find a way to escape. In the midst of cooking their rabbit, a strangely carnivorous Ankylosaurus trundles into Turok and Andar’s makeshift camp and eats their food. Leaving the dinosaur to its meal, Turok tells Andar that they should make for the distant cliffs and try to find a way to climb out of the valley. Their trek leads them into the path of a Tyrannosaurus , and their efforts at avoiding it in turn leads them into the territory of a nearby tribe of primitive humans, who use large nets to capture antelope. The cave people are attacked by giant wolves , however, but are saved by Turok and Andar’s skill with the bow. The cave people chase their saviors away from their hunt, only for the Tyrannosaurus to arrive. The cave people run with their antelope meat, leaving the T. Rex to eat the wolf carcasses. Turok decides to befriend the cave people, but is chased away by thrown rocks. He then leads Andar up the mountain in the hopes of finding a way to look into the cave people’s camp. Turok notices that the people are hungry and that the best way to befriend them would be to give them large amounts of food. Finding a cave high up on the mountainside, the two warriors decide to set out on their task in the morning. When morning comes, however, they are attacked by a panther that is swiftly shoved off of the cliff by a Pteranodon. Turok and Andar stumble upon a member of the cave people fishing by crushing the roots of a nearby plant and throwing them into a pool of water. Wherever the plants land, the fish bob to the surface. Andar manages to scare the man away, and the two warriors eat the fish. Turok takes some of the plants and, after crushing them, coats his arrows with the poisonous residue. He tests his new weapon on a Procamelus, and the creature drops instantly. They take its meat to the cave people, who are all too happy to have more to eat. Turok demonstrates for the tribe how the bow can be used to hunt wild game, but the demonstration is interrupted by the Tyrannosaurus. Using their poison arrows, Turok and Andar kill the T. The cave people are overjoyed, and Turok tells the cave people’s chief that he can teach them how to use the bow and arrow for themselves. The item “Four Color #596 CBCS 7.5 like CGC Dell 1954 1st app Turok and Andar” is in sale since Friday, January 1, 2021. This item is in the category “Collectibles\Comics\Golden Age (1938-55)\Other Golden Age Comics”. The seller is “madeofmiracles925″ and is located in Dublin, California. This item can be shipped worldwide.