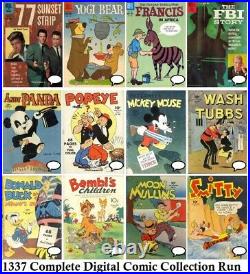 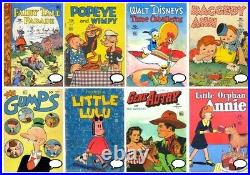 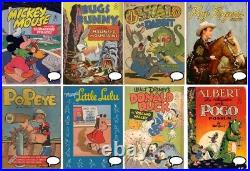 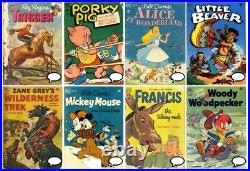 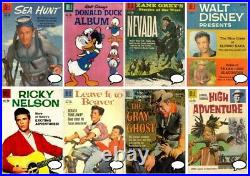 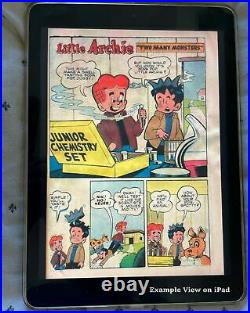 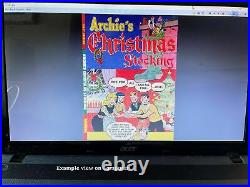 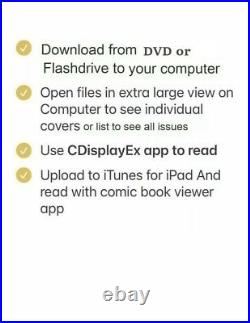 Digital Scans on FLASHDRIVE (only missing #7 from 2nd series). Includes 16 of 25 from 1st series as a bonus! The Dell Four Color Comics (Series 2) were published from 1942 through 1962. Dell Four Color Comics was a try-out series where a title was published to determine market acceptance. Sometimes referred to as One Shots, the Dell Four Color Comics became the launch pad for many of Dells most popular titles, including Bugs Bunny, Donald Duck, Lone Ranger, Marges Little Lulu, Mickey Mouse, Porky Pig, Uncle Scrooge, and Woody Woodpecker. This is a digital collection of 1337 comic scans on 1 generic 16GB flashdrive. You can read on your computer or download to most readers like the iPad! Files are cbr & cbz.. Software for viewing these is free if you Google Cdisplay or comic rack you can download them. You can read on computer or I-pad. 1942 – April-June 1962. Standard Golden Age U. Standard Silver Age U. As a series, it was held together mostly by its numbering–only the early 1940s issues carried the continuing title “Four Color”; preceding and successive issues changed titles every issue to match their contents. By convention, the entire series is referred to as “Four Color” or “Four Color comics”. For unknown reasons Dell restarted the numbering on the Series in 1942, leading fans to refer to the “first series” and “second series” or “Series I” see Four Color (Dell, 1939 series) and “Series II” (this series). Early issues have “Four Color Comic” on the cover. Last with this notation is #101. 1321 issues were printed! See complete list of individual issues here. And here: comicvine. Gamespot. Com/four-color/4050-927/. Digital Comics will give you a whole new experience in the way you read comics Some are scanned from original hard copies which will show the imperfections of the original or some are digitally restored. SO EASY TO USE! No more worry about pulling your comics out of storage bags, damaging valuable collections. Now you may be able to read issues you might never otherwise see. In vibrant colors with the ease of flipping to the next issue, flipping through pages quickly, resizing or zooming at will! We love comicflow For iPads. Cdisplay is included for windows, for Mac computers cbr readers are available from the Mac apple store. Everything but the comic book smell! Hours of reading enjoyment! Please see our other comics listings. Thanks for shopping with us! It will be appreciated in return when your Package arrives! You may choose to have your package insured at your expense. If your item hasnt arrived or isnt as described, go to. We want you to have a great shopping experience. If you have any questions, or want to know how youre covered, check out their frequently asked questions. The item “1300+ ISSUES Dell FOUR COLOR Comics COMPLETE RUN #1-1354 Digital Scans 1942-1962″ is in sale since Sunday, June 20, 2021. This item is in the category “Collectibles\Comic Books & Memorabilia\Comics\Comics & Graphic Novels”. The seller is “philipb07″ and is located in Charleston, South Carolina. This item can be shipped worldwide.